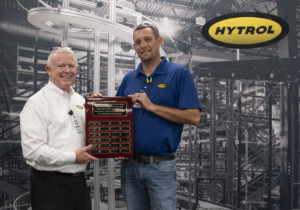 JONESBORO, Ark. — Jeff Hall is this year’s recipient of Hytrol’s annual Loberg Award. He received this award at a ceremony held on June 30 in Jonesboro as part of the Loberg Day festivities to honor company founder, Tom Loberg.

Hall has worked at Hytrol for nine years. He has served the company as power assembler, production supervisor, lead production supervisor, and is currently serving as Second Shift Production Manager.
“I am honored to receive this award,” said Hall. “The people here are the best part about getting to work here and what makes Hytrol special.”
The Loberg Award is the highest honor an employee can receive. It is given to an employee that demonstrates the values Tom founded Hytrol on: faith, family, empathy, commitment, gratitude and community.
“Our values are a way of life. It is something that we should live out not only here but outside of work as well. If you live those values, you’ll make an impact anywhere you go,” said Hall.
Recipients are nominated by fellow Hytrol employees and are then selected by a committee. Nominations highlighted Hall’s positivity and dedication, not only to his team members but Hytrol as a whole.
“Jeff is an exemplary person to receive the Loberg Award,” said President David Peacock. “He works tirelessly to ensure that Hytrol is successful. He demonstrates Tom’s values every day and encourages others to do the same.”
Hall’s advice to new employees is to come to work and do their best every day. He also encourages everyone to meet the second shift team.
“Working with this group every day and watching them grow as leaders is a huge motivator for me,” said Hall.
Previous Loberg Award recipients include Tony Sartin in 2017, Wayne McGill in 2018, Dan Holmes in 2019 and Teressa Vinson in 2020.
For more information on Hytrol, visit www.hytrol.com.