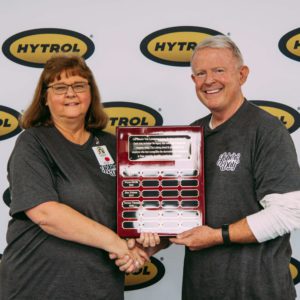 JONESBORO, Ark. — Hytrol is proud to announce long-time employee, Teressa Vinson is the recipient of the 2020 Loberg Award. She received the award during the company’s annual Loberg Day celebration on July 1 and the first female recipient.

Vinson has worked at Hytrol for over 40 years. She was a file clerk, typesetter, marketing secretary and is currently the executive assistant.

“I am honored to receive this award. It was a privilege to get to work with Mr. Loberg, he was a great man. He took pride in his employees and they would do anything for him, myself included,” said Vinson.

The Loberg Award is the highest honor a Hytrol employee can receive. The award is given in memory of Hytrol’s late founder, Tom Loberg. It is given to an employee who exemplifies his character and values. Recipients are nominated by fellow Hytrol employees and selected by a committee.

Nominations highlighted Vinson’s dedication and willingness to make sure the Hytrol Family is taken care of. Shying away from praise and public recognition, Vinson is said to keep things running and knows everything about Hytrol.

“Hytrol is fortunate to have someone as exceptional as Teressa,” said Hytrol President David Peacock. “She represents each of our core values. Her commitment and compassion for Hytrol is in keeping with the empathy that was demonstrated by Mr. Loberg. It is an honor to work alongside her every day.”